The World Demolition Award is one of the most respectable awards worldwide, concerning the Demolition and Recycling Industry. 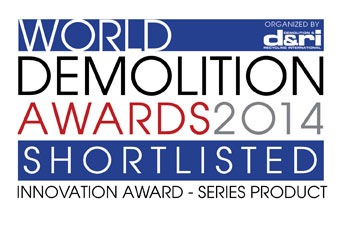 The Awards are intended to reward best practice and innovation within the demolition industry and 2014 represents the 6th consecutive year they have been held.
The judging panel is made up of eight highly respected figures from the global demolition sector – including the current President of the European Demolition Association.
The innovation award is an award open solely to manufacturers and unique in the respect of being the only global award to be judged by the demolition industry itself. In order to be shortlisted – the products have already gone through a rigorous judging process and represent the cream of this years' entries.
The winners of each category will be announced at the 2014 World Demolition Summit that will be held at the NH Grand Krasnapolski Hotel in Amsterdam on November 6, with the Awards being presented at the Gala Dinner.

Overview of the latest features of Rockster's new development:

Rockster is proud that very experienced professionals of the global demolition industry nominated this newly developed machine as "INNOVATION 2014".

Video of the test run of the first hybrid crusher owned by the company Eurovia in France - painted in the CI colours of the French roadbuilding giant. The output is really remarkable: